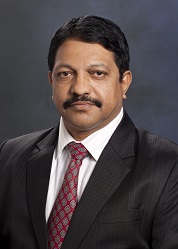 Wg. Cdr. Shriram Ghatpande is Business Development Director, Bell India Operations. He is responsible for Sales and Marketing of Bell Helicopter Military and Commercial products in India, Nepal and Bhutan.

Wg. Cdr. Shriram Ghatpande is associated with Bell helicopters since 2004, initially working with Bell Independent Representatives and then joined Bell Helicopter India Operations in December 2012. Prior to joining Bell Helicopter, he has worked as Vice President Business Development in Aviation Software Company and as General Manager Operations and Accountable Manager with the Non Scheduled Charter Operations business.

He is a former Indian Air Force pilot with 22 years of active service and over 4,400 hours of flying experience in 3 types of aeroplanes and 3 types of helicopters. He was commissioned in Indian Air Force in June, 1982. He is an All Purpose Flying Instructor and has imparted flying instructional training to many pilots from the Indian Air Force, Indian Army and Indian Navy.

He is a post graduate in "Defence & Strategic Studies" from Defence Services Staff College, India. He is a life member of Rotary Wing Society of India.